As a 47 year old disabled Gulf War veteran who had virtually given up on life and who saw a very bleak future, he refused to listen to the “experts” who had counted him out and slowly clawed back control of his life.  Arthur was told by his doctors that he would never again be able to walk on his own following the injuries he had sustained during his military service.

But even though he was very overweight and almost completely immobile, he refused to give up hope.  Arthur came across a man called Diamond Dallas Page who taught Yoga, and since regular exercise was out of the question for him, he decided to give it a try.

Dallas became the only person who believed in Arthur and who committed to helping him.  While Arthur struggled through his DDP Yoga workouts, Dallas provided him with support and encouragement over the phone and by email,  and pushed him to believe that anything is possible.

Arthur fell time and time again but kept getting back up and trying again.  Through sheer persistence he lost an incredible amount of weight, gained strength, balance and flexibility and transformed himself and his whole life.

Even though doctors told Arthur that he would never walk again unassisted, he did that.  In fact, he achieved much, much more, as the video below shows.

Arthur’s story teaches us that we should never place limits on what we think we can achieve, or listen to others who do – even those who theoretically are qualified to judge.  The fact is we never know our own true potential until we put it to the test.

This is a great lesson about never giving up and never losing hope – no matter what.  Whatever you desire, you can achieve.  All you need to do is believe in yourself and take that first step. 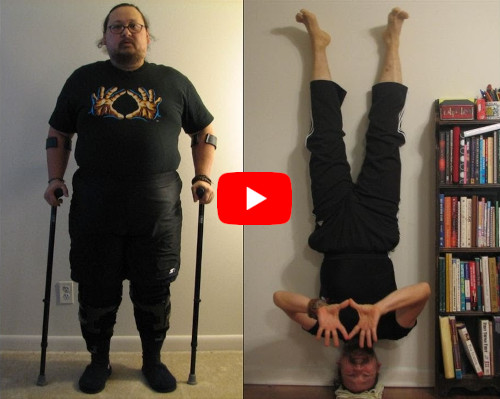